Added to wishlistRemoved from wishlist 0
Add to compare
$12.50 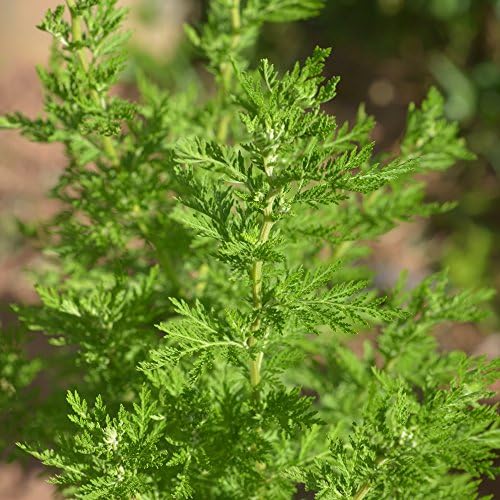 Artemisia is a genus of annual flowering herbs that grow in a shrub habit and are in the aster family. Colloquially, it is known as sweet sagewort, sweet annie and annual wormwood, its foliage is highly scented, and it blooms during the summer and early fall. It is a naturalized weed in many regions, but also cultivated in Africa as an alternative medicine for use in treating malaria. Artemisia is also grown for the cut and dried flower trade. Step 1 Requires full sun or partial sun and some shade. Provide a soil that is well-drained with average nutritional content. Like many herbs, artemisia is well adapted to growing in subpar soil conditions, and most residential garden soils are richer than the plant even needs, without amendment or chemical fertilizers. Step 2 Water artemesia so that the soil remains consistently moist but not wet. The plant is drought-tolerant but will perform better and bloom more profusely with moist soil at its roots. In very hot or dry climates, mulching around the base of the plants with shredded bark or cocoa hulls will help to retain moisture and cut down somewhat on irrigation needs. Step 3 Harvest artemisia bloom spikes and foliage for cut flower arrangements or for drying just as they reach their peak beauty. Cut down the stem at the crown of the plant and place into a vase filled halfway with cool water. To dry, hang the stalks upside down, separated from one another in a cool, dry location, for several weeks. Step 4 Prune to control shape and size in the garden as well as to prevent the seed heads from self-sowing. Being that the plant is an aggressive self-seeder, you must deadhead and discard flowers or seed heads as they mature in the late summer and early fall to prevent many new plants from cropping up. Once established, artemisia can be difficult to eradicate owing to its seeding habit. Thin plant stands in the spring and fall when the soil is moist by pulling up from the roots and discarding the plant.

Originated in China over two centuries ago in traditional Chinese medicine to treat fevers. Fast forward to the sixties – Scientists are looking for a cure for malaria that is quick, efficient and has no side effects. After extensive tests, it was discovered that Artemisia Annua could actually cure malaria.
This was one of the reasons the Vietnamese won the Vietnamese war. The number one affliction was malaria at this point, so using what they call ‘changshan’ to combat malaria was a stroke of genius.
Tu Youyou had a eureka moment when she discovered that you have to extract it at a lower temperature in order to preserve antimalarial activity. Pharmaceutical companies began to become interested in artemisinin, the active ingredient.
Unfortunately, because it is an isolated substance, eventually it became resistant. The world health organization denies this however, and claim that only if you drink the tea it creates resistant. Others are saying no, it you isolate a substance, it is normal it will become resistant. Nature is intelligent, viruses adapt. “Not only does it appear to be effective, but it’s very selective,” Lai states. “It’s highly toxic to the c7ncer cells, but has a marginal impact on normal breast cells.”
The compound helps to control malaria because it reacts with high iron concentrations that are found within the malaria parasite. When iron comes into contact with artemisinin, a chemical reaction ensues, which spans charged atoms chemists like to call “free radicals.” These free radicals will attack various cell membranes, breaking them apart and easily killing this single-cell parasite. 7 years ago, Lai started to hypothesize that the process might work “The Big C”, too.